All of our courses spend three days training on Gran Paradiso and three days climbing Mont Blanc, however how you end up actually tackling Mont Blanc (which hut you leave from/return to, and which day you make your attempt) will vary based on weather and hut availability. How difficult your ascent ends up being will depend on (in descending order of importance):

We have to book huts well in advance and before we know what the weather is going to do, so you must aim to be fit enough for whatever combination of weather/time available/huts you end up getting on your week; many of our ascents are in sub-optimal conditions, and when this happens only those who are fully prepared as per our fitness guidelines make the summit.

THE GOUTER ROUTE: HOW AND WHY WE USE IT

The Gouter route is the normal route on Mont Blanc, it is the shortest way to get to the summit and despite sometimes being too dry to climb because of stonefall in the Grand Couloir, it nevertheless has low avalanche risk and produces the most reliable conditions overall. 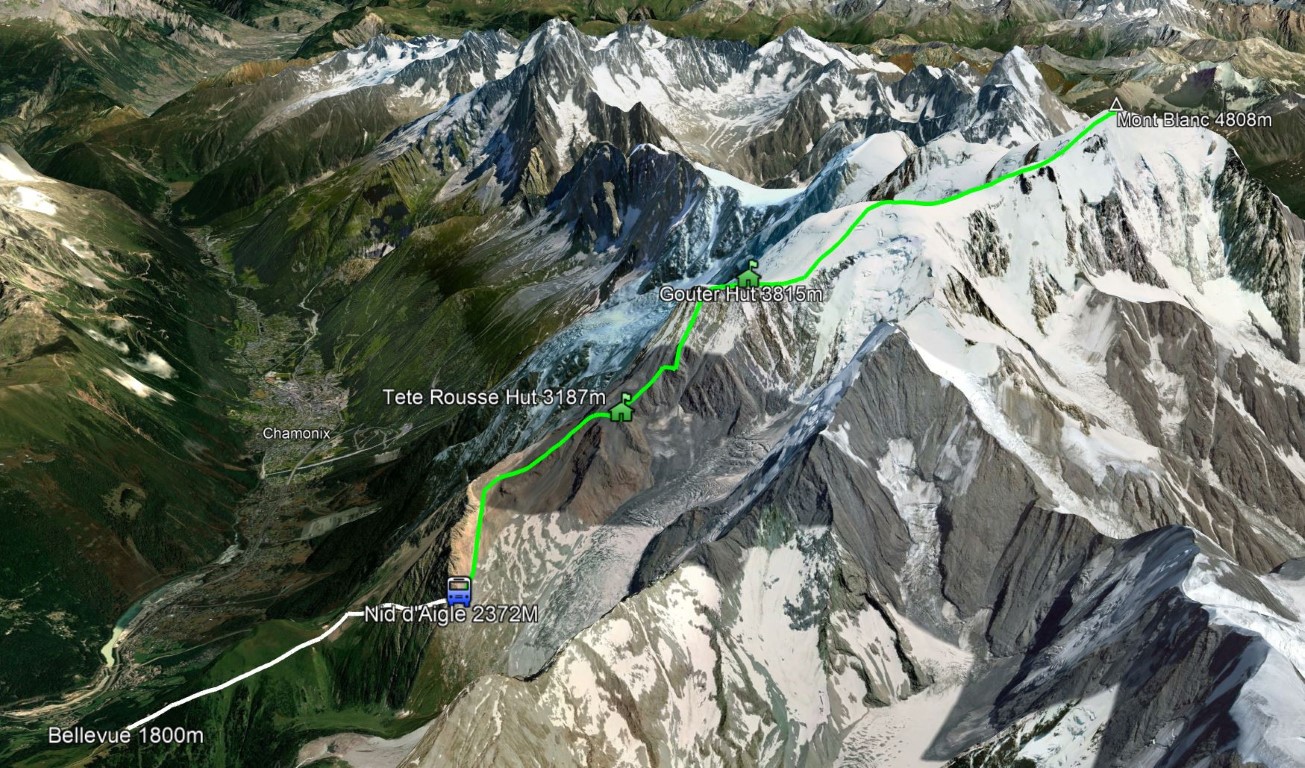 Most of the time one can make use of the Bellevue cable car and Nid d’Aigle train to get to 2372m (see above), although about 25% of the time the latter doesn’t run for one reason or another and we have to walk from Bellevue at 1800m (if the Bellevue doesn’t run we use a 4×4 taxi to get to the same point.) In making your attempt you will spend either two nights at Tete Rousse, two nights at Gouter or one night at each, depending on availability; the differences between these combinations are explained below:

Two nights at Tete Rousse: this is harder as the overall effort is less evenly broken up and the summit day is longer, however you’ll have a much better night’s sleep starting from here and significantly less chance of getting altitude sickness by starting low; you’ll also tend to be out of sync with the majority of people on the mountain as most people still climb Mont Blanc using the traditional “one night in Gouter” approach. Two nights at Tete Rousse was our preferred method for many years and we had great success with it until the introduction of the (highly unreliable) internet booking system forced us to vary our program. A last day ascent from Tete Rousse works just fine as long as the train is running, if it’s not it becomes a pretty tough call and only for the fittest.

Two nights at Gouter: This is probably the easiest option as it has the shortest summit day, however you will have a higher chance of altitude problems starting from here and you will sleep noticeably less well. Many people will find they do not need the second night as they will get back to the hut sufficiently early to descend to the valley. We tend to aim for this option for the first two and last two weeks of the season when the Nid d’Aigle train is definitely closed (though it often breaks down mid season as well!).

One night at Tete Rousse, one night at Gouter: Probably the most flexible option overall, though as with the previous option fast parties might find it somewhat overkill in good conditions.

AIM TO BE FIT ENOUGH TO COPE WITH ANY OF THE ABOVE SCENARIOS.

All of these options including last day ascents are perfectly feasible for first time mountaineers who are properly endurance fit, and the differences between them are not that great compared to the overall difficulty of the undertaking. There is no easy way up Mont Blanc so rather than trying to juggle huts and timings to bring the mountain down to your level, train a bit harder and lose a few kilos so whatever happens you can deal with it.